Hello My dear friends and I hope life is treating you all well. Lately I have been very busy and was not able to get time to write anything, And today I got some time to write this blog post to share with you all one special news. So be with me in this post to know what that news is.

Before I tell you more about this year’s contest some backstory is mandatory. Last year during Ganpati Celebration Pixlent organized one Photography contest named as Devotion and Emotion. And I submitted 10 of my best (I still wonder why) photos but sadly none of those passed the selection round. Which demotivated me badly.

So when this year’s contest was announced I wasn’t even in mood to submit my entries. As I couldn’t go out much this year to cover various Ganpati idols as I did last year. But on the last day of contest Pixlent team reminded me through their Instagram account. And reluctantly I submitted just 2 of my entries. And I was bit more confident about one as I knew it was a unique perspective I could get in that capture (more about it later in this post)

One week later what I got to know was the happiest news for me. The photograph I was confident about was actually shortlisted. And was selected to be displayed at the exhibition among top 200 images. It was such a proud moment for me to see my name on the frame. Later I received the beautiful frame of my photograph which is now gracing the wall of my room.

Tada drum roll… and here is the Frame and my name on it…. *happy grin*

Now something about this photo… why this was so special to me and what actually made it so unique as per perspective (for me) and how it got captured.

Just like last year I decided to cover all major Ganpati pandal this year too. I was roaming around from one pandal to other clicking as many photos as I could (more pics in future posts). There was one moment when I was standing far away from Dagdu sheth ganpati idol at one side of the lane made for devotee’s entry.

While standing there I was mesmerized by all the preparations and prayers done by priests (looking through my 250mm lens full zoomed in). And I was waiting for one moment when priest would come near to the idol offering his prayer. As I wanted to capture “The devotion of these priests towards Bappa” cause their dedication deserves some appreciation and attention. And this was the exact moment I was waiting all this while.

I had my framing done beside a red and white flower basket to add a leading line. And was about to press the shutter.. but all of the sudden the man standing just ahead me moved and his blue color shirt add that blue color at the bottom right side of the pic.

I was frustrated and angry as I just lost a beautiful composition cause of someone else. After that I tried so many times to get anything similar but failed. So at that time I was sure I dint get anything decent. But when I opened this pic in Darktable (my new post processing software) I was pleasantly surprised. As that blue color actually gave this Photograph a very nice framing which wasn’t there in my initial plan.

This framing was telling “Bappa (Lord Ganesh) being with his Loyal subject between those two colors as if these are the only 2 things exists in this moment.” and thats the reason I submitted it for the contest. Tough it dint win I am happy it got shortlisted for exhibition at least.

So this is the news and details about the photograph. And yes I know I am late as I should have told you all sooner so that you could have visited the exhibition too. But I was way to busy for last many months (which deserves a post of itself later).

Still I am happy that my photo was shortlisted and wanted to share the happiness with you all too.

See you very soon with some more pics from the Ganpoati Photowalk.

I'd love to hear from you... Cancel reply

This site uses Akismet to reduce spam. Learn how your comment data is processed. 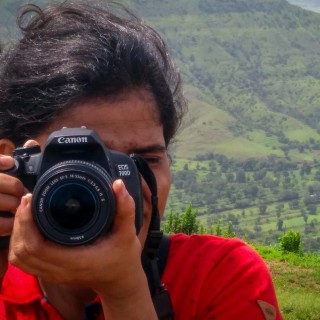 Hello.. This is Pooja. Video Editor - Photographer - Blogger, Curious - Creative Soul and Forever Learner. Exploring World thru My Lens. This blog is my journey of learning The Technology and The Art of Photography. Which I share in my blogs while exploring Life, Nature and this whole beautiful world. And I invite you to join me in this exciting journey. Also hoping you'll have fun being here.

Follow Moments Thru Lens on WordPress.com
Join 857 other subscribers